If I had time to see this movie before the end of 2019, my top movie list would look quite different. Most war films are a highlight reel; full of blood, glory, and noble sacrifice for the greater good. There’s even a love story or two involved to help ground the audience (not that we don’t already have enough doing that). 1917 isn’t a new tale being told by director Sam Mendes – an impossible-mission drama, like Dunkirk and Saving Private Ryan before it – but it was how the story is told that made all the difference.

Two young British shoulders during the First World War are given an impossible mission: deliver a message deep in enemy territory that will stop 1,600 men from walking straight into a deadly trap – one of them being one of the soldiers’ brothers.

A simple story that has been told many times – especially in war epics. What captured me was the fact that once we started with the opening frame of our two male leads being awoken out in a peaceful field to their walk through the trenches, we never pull away. 1917 is a story told in one continuous shot. Within the first 15 minutes, waiting for a breakaway from our leading men that never came, you know you are witnessing something special.

Sam Mendes has legendary cinematographer Roger Deakins (No Country for Old Men, Fargo, Blade Runner 2049) effectively drops the audience into the middle of the story and keeps them there, fully immersed in every muddy step, every tear dropped, and rifle click. 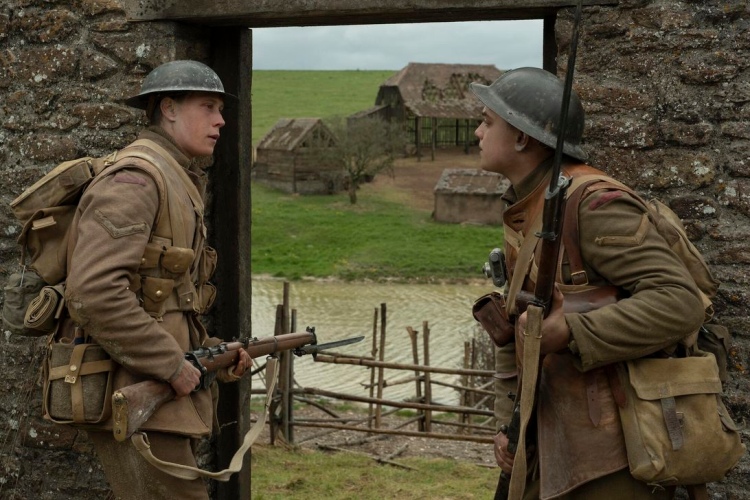 Our soldiers, one sharp, single-minded, stoic (George MacKay) and one cheerful but single-minded (Dean Charles Chapman) aren’t sure what mission they have been selected for by the gruff General Erinmore (Colin Firth). Once they are given the message to deliver, it is on to the German front line, also known as No Man’s Land. Believe me, it lives up to the name: whole villages left destroyed and abandoned or boobytrapped, the lives lost on the battlefield, and eerily quiet. For long stretches, the two infantrymen are entirely alone, and then suddenly, they are viciously not.

There are famous A-list actors who come and go (Benedict Cumberbatch, Colin Firth, Richard Madden, and Mark Strong) during the journey. But this movie belongs to our two soldiers, particularly MacKay, a 27-year-old Londoner with a long form and pale eyes filled with fear as he makes his way across German territory. His Lance Corporal Schofield isn’t just an Everyman that you cheer for, a hero that we can all relate to; he’s both the embodiment of hope and fear, and you couldn’t look away if he wanted to.

I couldn’t find any real negatives for this movie. If it wins the Best Picture Oscar, 1917 will have earned it.

What are your thoughts about 1917?