2020 is now a full week in. The confetti and streamers have been cleaned up and we’ve all gotten adjusted to the new year and a new decade. The year where our patience finally pays off has arrived. The movies offered in 2020 have been some that we’ve waited to land on the movie screen for some time. Long awaited follow-ups to Bad Boys and Coming to America arrive while the Wyld Stallyns reunite in Bill & Ted Face the Music. It’s not all sequels and reboots though, we’re getting a new musical with Lin-Manuel Miranda’s In the Heights coming to the big screen, courtesy of Crazy Rich Asians’ director Jon M. Chu. There’s a new slew of thrillers, horror films, colorful animated treats, action-adventures, and more. It’s never too early to get excited about movies so start marking these titles on your calendar.

Director John Krasinski’s directorial debut was a surprise hit in 2018 and returns to helm this sequel, which he also wrote, starring his real-life wife Emily Blunt, as it follows up with the Abbott family after the events of the first film. From the first trailer, it looks like we might get a flashback to the beginning of the… invasion? Whatever it’s called, it looks like Krasinski has turned up the tension, and audiences should be in for another thrill ride.

Goodness gracious, Great balls of fire, we’re getting a Top Gun sequel! After 31 years, Tom Cruise looks to race across the sky once again. Not a whole lot is known about the movie, except that a slew of the most in-demand young actors have been recruited – including Miles Teller, who will play Goose’s son – and that Val Kilmer will also be returning as Iceman. As the trailer promises, we’ll see shirtless volleyball, Tom Cruise on motorcycles, and flying jets to show this new crop of pilots what aviation is all about. It’s been a while since I’ve felt this need in theaters… the need for speed!

I wasn’t a big fan of Disney’s live-action remake of Aladdin and didn’t hear good reviews of The Lion King, but I knew the trend will continue as Disney presents the live-action remake of Mulan. Directed by Niki Caro of Whale Rider and North Country fame. Featuring Chinese star Liu Yifei as the titular character and joined alongside other Chinese legends like Donnie Yen, Gong Li, and Jet Li, this movie is poised to bring honor to the legacy of its animated counterpart and Chinese tradition. I don’t think the lack of music and Mushu will stop this film from conquering the global box office and – if it taps into the animated original’s magic like Beauty and the Beast – our hearts.

Not much is known about this next entry into the Fast and Furious franchise while we catch up with the Toretto crime/adventure/ant-terrorism/vigilante family once again. Director Justin Lin, credited as the man who helped turn the franchise around with 2011’s Fast Five returns to the director’s chair and will most likely go full-throttle like always. The movies might not be perfect, but that we’re in for a damn good ride!

True Detective director Cary Fukunaga takes the reins for 25th James Bond film, with Daniel Craig returning to lead the way for his fifth and (possibly) final go as 007. Joined by series regulars Ralph Fiennes, Naomie Harris, Rory Kinnear, and Ben Whishaw, as well as returning characters played by Lea Seydoux, Jefferey Wright, and Christoph Waltz. Recent Best Actor-winner Rami Malek is reported to play the villain, while Captain Marvel’s Lashana Lynch will play a newer model of 007; one who doesn’t seem willing to relinquish the famous code number back to Bond when he’s called out of retirement.

After the success and closing of Phase three, Marvel Studios kicks off its Phase 4 with this prequel focusing on Scarlett Johansson’s Natasha Romanoff. Besides taking place after the events of Civil War, we don’t know what the story surrounding the character will be, but she will be joined by David Harbour, Rachel Weisz, and rising star Florence Pugh. And who knows? Maybe we’ll see other Avengers like Jeremy Renner’s Hawkeye… or Robert Downey Jr’s Tony Stark.

Gal Gadot finally returns to her Amazon-princess role that hails as one of the best superhero films of all time. Bridemaids’ Kristen Wiig climbs aboard as villain Cheetah with the action is set during the Cold War in the ’80s. One huge surprise is Wonder Woman’s love interest, Steve Trevor (Chris Pine), brought back after his apparent death in the first film. This movie might or might not outdo the original, but I’m looking forward to finding out.

We’ve known for a while that Christopher Nolan’s next film would be called Tenet, and we knew who was on board to star in it. Outside of that, we knew little else about the film. While the first trailer that dropped in mid-December was cryptic enough that we still kind of don’t know what’s going on, we do know that John David Washington will play some sort of agent who is able to experience time both forwards and backwards. Nolan looks to blow audiences minds again this summer.

One of two Pixar offerings this year features Jamie Foxx as a jazz-loving middle school teacher whose soul is separated from his body during an accident and transported to a training center in which souls develop and gain passions before preparing to enter the bodies of newborn babies. There, he meets a soul in training (voiced by Tina Fey), who has been trapped in the center for years. 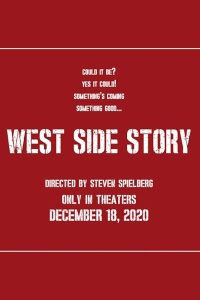 While we probably won’t see a trailer until later this year, this Steven Spielberg-directed adaptation of the Broadway musical looks to be boasting a young cast with Ansel Elgort (The Fault in Our Stars) and Rachel Zegler in the leads as Tony and Maria, respectively, as they navigate street rivalries and young love in 1950s New York.