“Based on an actual lie” is the introduction to writer-director Lulu Wang’s (actually true) story. This touching but bittersweet family dramedy will make you laugh and cry as you watch this family bond together around their matriarch. What isn’t a lie is The Farewell deserves to be considered one of the best films of the year (so far).

Aspiring Chinese-American writer Billi (Awkwafina) joins her family in China when they discover their grandmother has only a short while left to live and decide not to tell her, scheduling a family gathering before she dies.

Billi is living in New York, dodging her parents’ questions about her future and single status with a sardonic laugh. She maintains a close relationship with her beloved Nai Nai (Zhao Shuzhen) in China, faithfully keeping in touch with her. When her parents inform Billi that her grandmother has stage-four cancer, Billi recoils at her family’s decision to keep the diagnosis a secret. Billi feels that it’s Nai Nai’s right to know, even deciding to crash the quickie wedding engineered in order to bring the family back together and having her grandmother attend one last event.

Wang’s story shares some similar forms of other immigrant tales: the Babel Tower of languages, the ties that bind across continents, and the physical and cultural gaps that can still separate them. The traditionalism of the Chinese family clashes with Billi’s American upbringing and the impacts both can have on her future is an interesting dynamic to see. But The Farewell has a unique freshness of its own with Wang’s distinct voice, dry humor, an undertone of low-key sorrow that infuses itself in everyday life scenes such as visiting Billi’s late grandfather’s grave, where the group squabbles over offerings to a pre-wedding photo shoot that plays out while a serious discussion occurs simultaneously in the background. The family dynamics and history will make you smile, laugh, and bring a stray tear to the eye. The third act of the film is really where the film really pulls at the heartstrings (if it hasn’t already by this point), seeing the one-on-one interaction between Billi and Nai Nai. It reminds you how close family is, no longer how far the oceans separate you.

I often drifted into thinking about my own relationship with my remaining grandmother and how I wouldn’t be the man I am now without her guidance and faith. I appreciated the close bond between Billi and her Nai Nai.

Crazy Rich Asians‘ star Awkwafina feels more like a personality on screen than an actress, uncovering and embracing an honest vulnerability in Billi – a relative who hates the lie, but finally begins to let it open her up not only to her family’s thinking but her own. 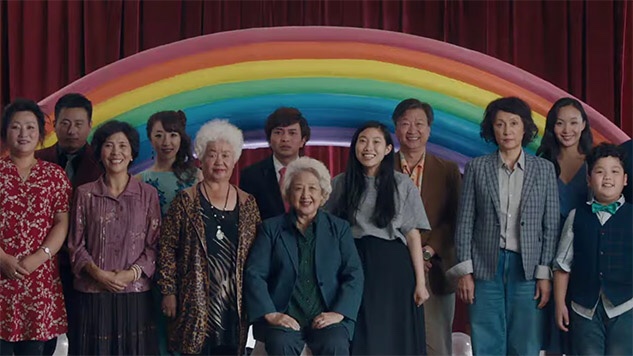 Everything in The Farewell works. A universal film with a low-key narrative, a strong familial bond, a sprinkle of comedy, and a huge heart make this movie complete.

What are your thoughts about The Farewell? Are you going to see this family dramedy?