After a small spree of Westerns, Quentin Tarantino returns to modern history… sort of. Tarantino tackles the Hollywood of 1969. Steve McQueen is still cool. Bruce Lee is kicking ass on movie sets, and hippies have descended on Los Angeles. Tarantino balances an interesting spread of characters and ideas. Fortunately, the famed director once again proves that he can juggle nonsense with great ease.

The review is spoiler-free.

Quentin Tarantino is one of my favorite directors. I remember the first time I stumbled upon Pulp Fiction one summer and being in awe of the storytelling and the style Tarantino put on the screen. As I got older and watched more of his films, I learned that Tarantino did not play “the studio game” (making films that he might not want, despite money being thrown his way), deciding to make films that only HE wanted to write and direct. His way has been financially successful so there is no need to play that game. Tarantino has not restrained in his filmmaking ever since Pulp Fiction took the world by storm in 1994. Once Upon a Time in Hollywood is no exception in the uniqueness of this man’s creative genius.

Once Upon a Time in Hollywood is basically a love letter to Hollywood’s Golden Age. Not only that, but a love letter to Los Angeles of that era. With the historical backdrop, this is still Tarantino’s ideal, revisionist Hollywood with his fictional leads. The film is careful not to get caught up into the stars and culture of the day. Keeping the film primarily focused on Rick and Cliff, Tarantino keeps the world fresh and the story surprising.

Rick Dalton is my favorite – and best – role I’ve seen from DiCaprio in years. What’s surprising is that Rick doesn’t really do much over the course of the movie. His main activities include drinking and trying to find roles that will get him back into the limelight. DiCaprio pulls off the larger than life persona that actors in the golden age have in the mind of the common audience member. Overall, Rick Dalton is a real man with regular guy stuff. Rick’s love life sucks, career struggles as New Hollywood rises, and filled with self-loathing. Despite not doing much in the film, it gives the audience time to watch Dalton dig into who he is as an actor and a person overall. Part of this is due to Tarantino’s talent as a writer and DiCaprio’s talent as one of the best in the business.

Brad Pitt shows off his comedic chops as a cool guy, Cliff Booth. The war veteran and stunt double to Dalton is in the same place as his boss; struggling to find suitable work. There is also a rumor that has producers looking the other way when Booth comes up. We all know how rumors work in Hollywood and real life. His only work comes from being Dalton’s personal driver and handyman. Unlike Dalton, Booth has more to do in the movie, getting involved with a family of hippies and helping carry the tension of film. There were times I wasn’t sure if Pitt would make it during the entire movie but you still enjoy watching him work. 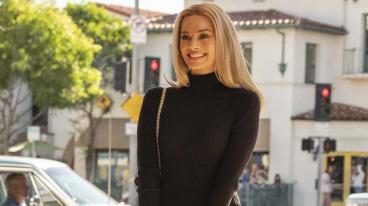 Speaking of families, Margot Robbie stars as Sharon Tate, a pregnant actress, wife of Roman Polanski, and Dalton’s next door neighbor. If you know anything about Hollywood at the time, the Manson Family was slithering through Los Angeles at the time. Luckily, Charles Manson (played by Mindhunter’s Damon Herriman) doesn’t play a dominant role in the movie. This is Tarantino being creative, respecting the history but making his own story. Tate is just a wide-eyed, up-and-coming actress celebrating her first major role and dreaming of her next role. I know the story of Sharon Tate and we have enough biography films about Charles Manson so I’m glad the focus was not on her.

While Tarantino’s films usually have heavy elements of dark comedy, Once Upon a Time in Hollywood is the first to feel openly comedic. The movie is hilarious and is greatly carried by DiCaprio and Pitt’s chemistry. The comedy is also powered by the supporting talents of Timothy Olyphant, Dakota Fanning, and even Bruce Dern. The film is light-hearted and more fun than anything Quentin Tarantino has ever done. Even with nine films in, Tarantino continues to find ways to push himself creatively. It’s definitely certain in Once Upon a Time in Hollywood.

As typical of a Tarantino movie, there are a lot of cameos. While there are familiar Tarantino actors, it isn’t just his usual gang of supporters. Once Upon a Time in Hollywood is unique in that its cameos of celebrities of other celebrities. Besides Roman Polanski and Charles Manson, there are at least a dozen other historical figures of Hollywood present. One that caught me by surprise was Mike Moh playing Bruce Lee. I had to do a double take because he looked just like the founder of Jeet Kune Do! The Bruce Lee fights Brad Pitt is worth the price to sit in the theater.

Sadly, Hollywood drags in the beginning and up to the second act. Like Tarantino’s previous films, I was wondering when the over-the-top insanity would happen. This movie is the least and the most over-the-top Tarantino film at the same time. It is also the least violent Tarantino movie, which is surprising since it somewhat fixates on the Manson family murders.  Don’t worry, the insane action scenes and violent dismemberment will happen after being more than patient than you do with Tarantino’s other eight films.

If you like Quentin Tarantino, you’ll love Once Upon a Time in Hollywood. If you hate Quentin Tarantino, you’ll hate this movie. When it comes to this director and his work, that’s how it breaks down. I think it’s his best body of work but not my overall favorite. It’s fun and deviates enough from a typical comedy to be fresh. A grounded story about two friends just trying to figure out life together. Tarantino grew up on these kind of films and it is apparent in Once Upon a Time in Hollywood. It is a love letter to Old Hollywood and the art of making movies.

What are your thoughts about Once Upon a Time in Hollywood?

Are you going to check out Tarantino’s Hollywood history lesson?