It’s a line from the movie that’s actually true when you think about it. While James Bond was the international spy called on to save the world, Shaft became the answer for African-Americans. While he wasn’t out to save the world, the private detective’s small scale missions on the streets of New York were just as important.

While his current assignment remained the same in this sequel, the action could have been executed better.

This review is spoiler-free. 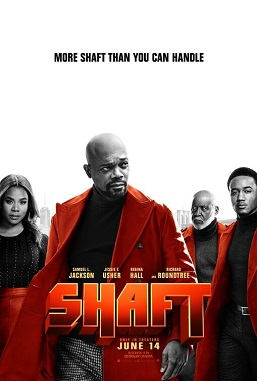 No need to worry about a backstory for the youngest Shaft which is established at the start of the film. From there, we see twenty years scroll by with recaps from the 2000 film and JJ’s life alongside those events. JJ’s grown up…and absolutely NOTHING like his father. Instead of leather and black, John Shaft Jr. is wearing button-up shirts with a tie, skinny jeans, and lacrosse-like Nikes. He’s a full-blown Millennial who knows nothing about the rough streets that his father has defended. Losing a friend is just what sends him to John Shaft II’s office door.

Samuel L. Jackson and Jessie Usher play off of each other with comedic timing. Jackson’s shots at the new school mentality of Usher had me laughing each time, every line laced with truth about the current generation. While some new school ideals come in handy, I’ve more been a fan of the old school tactics that Jackson chooses to implement during a situation; which was double-downed when the elder Shaft (Richard Roundtree) enters the picture to team up with his namesakes in the third act. Roundtree’s introduction feels very dated but with a warm nostalgia behind it.

The action sets aren’t too exciting and don’t go into the “bullet-time” effect that are used in shoot-em-up films. While this attempt makes the 2000 attempt at updating the character to contemporary action-hero feel worn out, it still felt entertaining. That’s mainly due to Jackson’s magnetic charm. Usher’s JJ, while hilariously annoying at times, finally gets on board with his father’s mentality and knowing that everything can’t be solved behind a computer screen. Despite the crime in New York’s underbelly that the detective family needs to defeat, this is a multi-generational action-comedy film at its core. Jackson said that as long as his films are entertaining and he puts butts in seats, he’s good. Shaft is a kickass good time that gets the job done.

What are your thoughts about Shaft? Do you think Samuel L. Jackson’s name on the poster still carries weight? Definitely leave a comment! Don’t forget to subscribe to One Scene at A Time!