This year hasn’t had much competition in the raunchy comedy/romantic comedy department. So while everyone is focusing on the mega blockbusters coming this summer season, a movie such as Long Shot could sneak under the radar. Going to an early screening of the comedy, I wasn’t sure what to expect. The main selling point were the two leads.

And that was enough.

(This review is spoiler-free.) 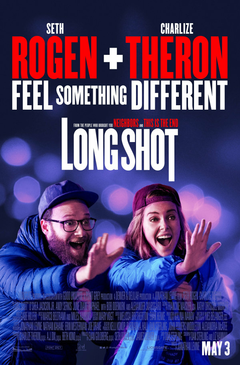 The story follows idealistic journalist, Fred Flarsky (Rogen), battered by his own misfortune and self-destructive ways, as he reconnects with his former babysitter and childhood crush, Charlotte Field (Theron) – who is one of the most powerful and unattainable women on Earth.

As the film opens and the two lead characters meet up, you already have a clear sense of who each of them are: he’s schlubby and a stoner in cargo pants, she’s driven and flawless but personally unhappy. As Field looks to advance her career, she learns that her appearance seems joyless and robotic to the public. They catch up, he’s reminded why he never forgot her since he was 12, and she remembers how much Flarsky made her laugh so Field hires him as her speechwriter to make her appear looser and funnier to gain more support for a vertical career move. At the end, I saw this movie as a reverse-Pretty Woman. As they cross the globe on a diplomatic tour, they bicker, banter, dodge terrorists, do some drugs, and, of course, fall in love.

These characters are not three-dimensional by any stretch. You’d never buy them together outside of a sitcom universe. Fortunately, the surprising chemistry of Rogen and Theron is as enjoyable like Red Bull-and-Champagne cocktail. It doesn’t hurt that each have their own hilarious sidekick (O’Shea Jackson Jr. and June Diane Raphael) to go to for advice and just come up with hilarious quips and profane punchlines that the screenwriters script delivered. While the second half feels a little undercooked as things get serious in comparison to the wild, insanity of the first half, it’s hard to file an grievance as Rogen and Theron delivered one of the best adult comedies we’ve seen in a long time.

Thanks for reading, everyone! Think you’ll check out this Summer romantic comedy? Definitely leave a comment! Also check out my Facebook page for this blog  and show some love! Until next time!