That tremor that you felt on Friday afternoon? The Force had awakened once again…possibly for the last time.

Star Wars Celebration 2019 emanated from Chicago, IL, introducing fans to what’s to come from those creative minds that work in a Galaxy Far, Far Away. From a new video game to the upcoming live-action show, The Mandalorian, coming to the Disney+ streaming network, the future seems bright for the groundbreaking science-fiction universe.

But after months of secrecy, fans were treated to a first look at Episode IX.

After the events of The Last Jedi, the remnants of the Resistance face the First Order once again – while reckoning with their own inner turmoil – altogether bringing the Skywalker saga to a definitive end.

There is so much to break down from this 2 minute teaser (seriously, 2 minutes?! Imagine how full trailer will look!). We’re not sure how much time has passed between the events of The Last Jedi and this film but one look at Rey (Daisy Ridley) shows that some time has passed.

Rey awaits on a desert terrain, breathless but confident. The familiar sound of a TIE fighter echoing in the distance…than speeding towards the scavenger. Powering up Luke’s rebuilt lightsaber, Rey turns her back to the fighter as it gets closer. I doubt Rey could outrun a TIE fighter, possibly piloted by Kylo Ren (Adam Driver), but that’s not Rey’s goal as she jumps up and apparently uses the saber to cut the fighter.

From there, we catch up with all the characters, including Oscar Issac’s Poe Dameron, John Boyega’s Finn, C-3PO…

Kylo teaming up with Stormtroopers…his mask being repaired…BB-8 and the new droid, Dio… 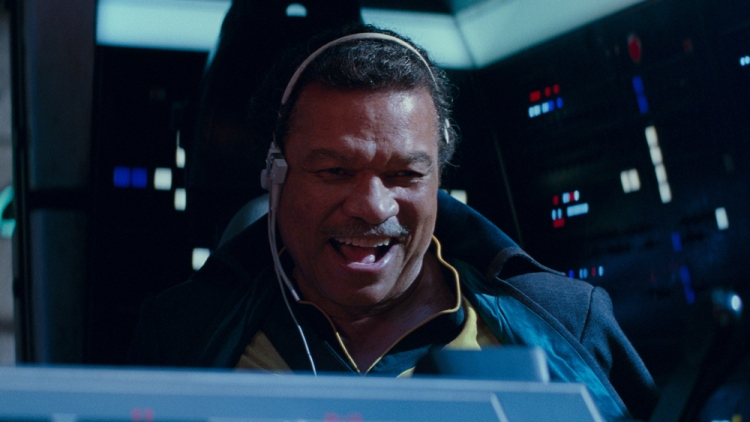 The unused archive footage of the late Carrie Fisher as Princess Leia shows her embracing Rey is just quick enough to pull at the heartstrings. The final shot shows the new characters together for the first time, looking upon the remains of what appears to the remains of the second Death Star. Like where has that been the last few decades?

But the final sound we are left with in the black screen is the chilling laugh of one of the biggest players in the Star Wars Universe. Emperor Palpatine’s laugh reverberated from my speakers and into my soul.

Including the title, The Rise of Skywalker. How do we interpret that title if it’s the end of this series? The ninth and final episode of the main Star Wars film franchise ending with the rise of a possible character who is gone? Who knows what J.J. Abrams has up his sleeve.

It brings a tear to the eye to realize that this is the end of a nine-episode saga. But I’m all here for it.

Star Wars: The Rise of Skywalker comes out of hyperspace and into theaters on December 20, 2019.