After much hype, advertisement, television spots, and a stellar 98% fresh rating on Rotten Tomatoes (if you want to rate the movies you see from critics), the Marvel Cinematic Universe unleashed its newest film. And this superhero film exceeds expectations.

(This review is Spoiler-Free)

Taking place after the events of Captain America: Civil War, T’Challa (Chadwick Boseman), returns home to ascend to the throne as the newly anointed king of the fictional African nation of Wakanda. While learning how to rule, the young king must go against forces, both inside and outside his home nation, and defend it from destruction as Black Panther.

This. Movie. Was. Fun. Bottom line. Really fun. After a brief history to catch you up on the history of Wakanda and its secret wonder, Vibranium, a meteor-borne metal so powerful that it powers the tech-advanced city and so rare – outside its homeland, at least – that its value is almost incalculable.  And where there are powerful gems, bad men must follow: among them are arms dealer Ulysses Klaue (Andy Serkis) and Michael B. Jordan’s brooding mercenary anti-hero Erik Killmonger.

Let me say that this cast is amazing. Boseman doesn’t have to carry this film on his own because each character is so fully formed, especially the females. I can’t remember the last time I saw female characters fully fleshed out this way, especially women of color. Andy Serkis is having a ball with each scene that he’s in. Martin Freeman reprises his role as CIA agent Everett Ross, who spends most of the movie in awe of the greatness around him as he assists T’Challa and his family. Even the minor roles of the stacked cast, such as Forest Whitaker and Sterling K. Brown, that didn’t get a lot of scenes held their own. It’s hard to find a weakness in this cast. 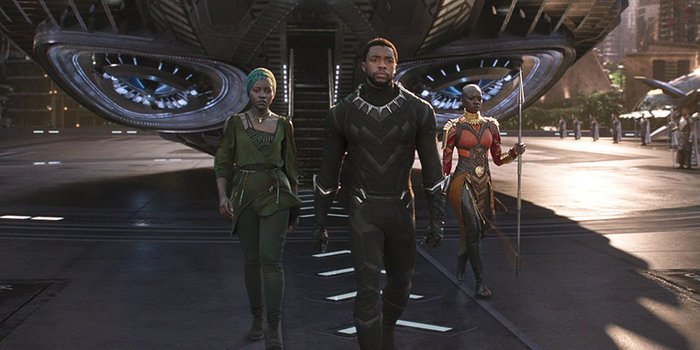 Ryan Coogler clearly had a vision for Black Panther: not only was it a Marvel movie, which carries its own expectations and formula, but there is a story fully rooted in black culture. Nothing that Coogler did felt accidental; from the opening flashback scene in Oakland, California to crafting Jordan’s Killmonger as a genuinely tragic figure. By the second act, I don’t see him as a villain; he sees himself as a soldier of social justice who has been warped by wrongs both seen and done to him.

Visually, the film is stellar but not perfect. No film is flawless; the last 30 minutes do feel frantic as we keep track of the chaotic final battles. But Coogler infuses nearly every frame with soul and style, making the case that a comic-book movie can actually have more substance and be something meaningful. Panther’s celebration of pride and personal responsibility doesn’t only feel like a fresh direction for the genre, it’s the true superpower of the movie.

I was asked by a relative if she needed to see any Marvel film before taking the journey to Wakanda. The good thing about this movie in this arc of the Marvel Cinematic Universe is that you can jump right in without having to see anything previous. So if you haven’t seen this movie, what are you waiting for?

One thought on “‘Black Panther’ claims its throne with style, a stellar cast, and rich storytelling.”