Hello, my readers! I’m back with a movie review for the most anticipated film I had on my list for the this summer (You know I had to review that). Christopher Nolan has always had my trust as a director. Ever since I saw Batman Begins, I became a Nolan fan. He creates a movie with an old school style: not depending solely on computer generated effects and preferring to use the warmth and poetry of film stock to shoot his movies. Nolan has always delivered an experience to his audience and his new film, Dunkirk, is something I didn’t expect from the director of Inception and Interstellar. Dunkirk is a spectacle; a tense war film with tight storytelling that we’ve never expected from the director of Memento and The Dark Knight Trilogy.

Based on the true story in the early months of World War II, Nazi Germany had invaded France, pushing thousands of Allied soldiers into retreat to the seaside city of Dunkirk. As the perimeter shrinks, the Allied forces await evacuation to home, which was only twenty-six miles away.

Nolan tells this harrowing story from three different perspectives: land, sea, and air. The land covers one week, the sea covering one day, and the air covers one hour. Nolan does an excellent job weaving these three narrative threads seamlessly; while the time frames are different and can be confusing, it makes sense as the film reaches its conclusion. On the ground, the story focuses on a young, scared infantryman named Tommy (newcomer Fionn Whitehead), who scrambles amidst the enemies’ flying bullets and falling bombs to stay alive until rescue arrives at the beach. His desperate attempts to escape the beach always leads him back to the waiting game, either for salvation or death. He doesn’t say much and doesn’t have to. The fear and confusion on his face, along with the other soldiers on the beach, tell enough for the audience. On the sea, we board a sailboat called Moonstone with its unflappable captain (Mark Rylance) and his teenage son and his son’s best friend. As they motor across the channel to do what they believe is their duty to bring the trapped men of Dunkirk home, they bring aboard a shell-shocked survivor of a torpedo attack (Cillian Murphy), who refuses to return to the hell he had just escaped from (safe to say that he wasn’t a happy passenger). In the air, we are in the cockpit of a Spitfire with a cool-under-pressure RAF Pilot (Tom Hardy), who’s flying on fumes for a good part of the movie, but continues to dogfight against German planes in order to provide cover for the men on the ground. 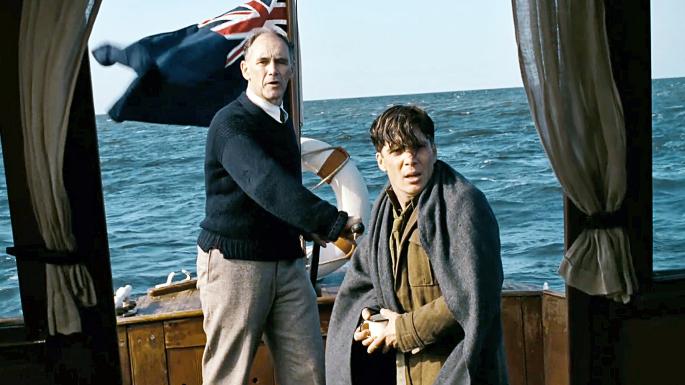 Nolan’s cuts and editing between the three narratives are slow and can be confusing at first, then picks up, going faster and faster. The danger and sense of urgency are heightened for the audience as they watch the soldier despair to make it home. Hans Zimmer’s excellent score sets the tone and changes the pace when the danger increases in each arena and the narratives crossing over. What makes this film stand apart is the visual language. There is not a lot of dialogue in this film so the emotional resonance lies in the visual. As the visual language is being heightened by what we are hearing, it sweeps the audience up into the film. This movie is not one of the big, dramatic, for-Oscar-consideration as far as solo performances. It’s a sensory experience that takes the audience into the uncertain fog of war. By the time the credits roll, you feel emotionally exhausted.

I watched this movie during a special 70 mm screening (IMAX wasn’t available) and enjoyed every second of the near two hour war film. At the end of Dunkirk, what stands out the most besides the obvious inspirational message of hope or everyday heroism is the small unshakeable images that stick with you. A PTSD soldier walking into the surf to his death. Nurses handing out tea, bread, blankets, and comforting words to the haunted men they have rescued. Those resonate with you. As of right now, I put Dunkirk as the best motion picture of the year so far.