Pirates of the Caribbean: The Curse of the Black Pearl hit theaters on July 9, 2003. Based off of the famous ride at Walt Disney World, the world was introduced to high seas adventures of Captain Jack Sparrow and others. A supernatural spin on the pirate genre using modern technology and strong story, the film gathered a cult-like following that continues to this very day. After the success of the first film, a second and third were made to complete a trilogy to tell the story of the pirate captain along with Will Turner and Elizabeth Swann. While the next two films were not well received by critics, the adventures of Captain Sparrow resumed with a fourth film. Once again, it was not liked by critics and some long-time fans.

So with news of a new film in the series, there were collective groans of another big-budget Pirates movie. Even with the star power of Johnny Depp reprising his role as Captain Jack Sparrow wasn’t enough. But as a fan of the series, you have to give this installment a chance.

At the very beginning of the film, we’re introduced to a young Henry Turner in search of his father, Will Turner (Orlando Bloom), the cursed captain of the Flying Dutchman. Finding out that the mythical Trident of Poseidon will be able to break his curse, Henry vows to free his father. Nine years later (and five years after the events of On Stranger Tides), Henry is now grown up and working on a British Royal Navy warship. After being locked away for mutiny by trying to warn the crew about the Devil’s Triangle, the young Turner becomes the last man alive as the ship is attacked by undead sailors, led by Captain Salazar (Javier Bardem). Upon seeing a wanted poster for Jack Sparrow, Salazar allows Henry to live in order to seek out Jack to deliver a deadly message.

We find Jack Sparrow (Johnny Depp) down on his luck after a failed attempt at a Fast Five-inspired bank robbery with his crew. After abandoning him for being unlucky and failing to deliver on promised treasure, Jack finds himself alone. Meeting up with Henry and another prisoner, Carina Smyth (newcomer Kaya Scodelario), Sparrow and his young accomplices sail out in search of the Trident of Poseidon for their own separate reasons. But they are not the only ones seeking the mythical treasure as Hector Barbossa (Geoffrey Rush), Captain Salazar, and the Royal Navy chase down the pirates. 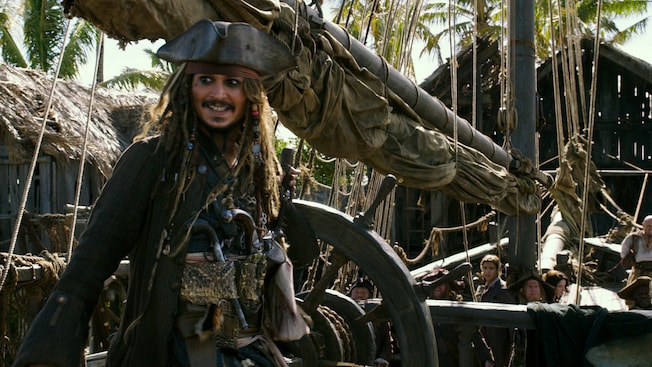 Over the course of this film, I found myself feeling like this was similar to the first film and getting more intrigued as it continued. The supernatural aspect of the movie with the undead pirates, mystical treasure is a rehash from Curse of the Black Pearl, but the writers have talked about being inspired by the first film. The inspiration helps this installment work well enough as a stand-alone, swashbuckling film despite the fact that it is a part of a continuing series. The special effects are excellently done and it’s obvious that a lot of the $230 million budget went into making the undead Salazar and his crew very believable, especially for those watching in IMAX 3D (which I did).

Javier Bardem did an excellent job as the maniacal, vengeful Captain Salazar. His rage is rooted in his dented pride after his first encounter with a young Jack Sparrow years prior and holding onto his revenge in his body after being trapped in the hell of the Devil’s Triangle. Bardem is probably the best villain of this series since Bill Nighy’s Davy Jones. Newcomers Brenton Thwaites and Kaya Scodelario were welcome additions to infuse a new protagonist relationship into the series, something that was lacking to me during On Stranger Tides. Kaya’s character represents the continuing run of strong female protagonists/antagonists in films today: strong, independent, smart, and doesn’t always need saving. Carina Smyth is an astronomer and fighting for the right to study at university, a right that women didn’t have at that time. She’s also on her own personal story about her lineage. What I found to be a strength was that Captain Jack Sparrow wasn’t the focal point or main protagonist in the film in my eyes. He played a role mirroring how Sparrow was in the first film; being sought out by others and being a party crasher for the other characters. We also go into Sparrow’s backstory which helps honor the mythology of the franchise. We’re also introduced into fan favorites and old friends, like Will Turner, Elizabeth Swann and even an old ship, by the end of the film.

This film was billed as ‘The Final Adventure’ and while there seems to be plans for another sequel (especially after the post-credits scene), this film could have ended the series on a positive note. No, this movie is not perfect; its plot feels bloated and hard to keep up with at certain times, my position is different from the critics. Most of the negative reviews I have read probably came from people who didn’t want another Pirates movie. I didn’t either, but Dead Men Tell No Tales recovers the magic that made audiences fall in love with this high-seas adventure series.