Well, I’m sure everyone has heard about the major Oscars flub that made Steve Harvey’s Miss Universe mistake look like a small error. But let’s not try and let that overshadow the rest of the ceremony. Overall, I think the awards were decent this year; Jimmy Kimmel did a fair job but I don’t expect him to return next year.

Now, I’m not going to cover all of the awards that were presented and awarded over the near four-hour show so I’ll just be hitting the major awards. I was not surprised by most of the winners except for possibly one but I’ll get to that later. Unfortunately, I was not able to review all of the movies that were nominated from my blog; however, I did see a fair amount of them (eight out of the nine Best Picture nominees)! So let’s begin!

The first time I saw Mahershala Ali was during his time on the Netflix series, House of Cards. Even for the small time he was on there, I was impressed with the energy he brought to the political drama. Watching Moonlight, his character, Juan, was someone that a young man could look up to. Juan was very grounded and completely believable; a person that you could walk by every day and not notice them unless they were in your life. Ali showed a great understanding of his character, embodied him, and earned his award.

I’ve always been a fan of Viola Davis’ work and her commitment to her characters. Sunday marked her third nomination for an Academy Award and she finally earned it. Davis’ work as Rose Maxson was emotional and powerful, making you root for her character as the story unfolded. To me, Davis was one of the prime reasons Fences is recognized as one of the best films of 2016.

Out of all of the Best Picture nominees, Manchester By The Sea wasn’t my absolute favorite, but I could see why it was nominated. Affleck played Lee Chandler, a sullen and quiet janitor, who is called back home after his brother’s death. It’s definitely one of those films that pulls at your heart strings and keeps pulling as the film progresses and the story unfolds. This has to be one of the best roles that I’ve seen from the younger Affleck and I hope to see more. Maybe that explains the beard…

La La Land is one of my favorite movies of the last year and Miss Stone is one of the reasons why. As an actress herself, she was perfect for the role of Mia, an aspiring actress in the film. Emma Stone has a classic Hollywood aura to her in this 21st century world and it shined through in this award winning film. All of her acting muscles were flexed in this movie and it really shined: acting, dancing, singing. I’m expecting more great things from her in the coming years. 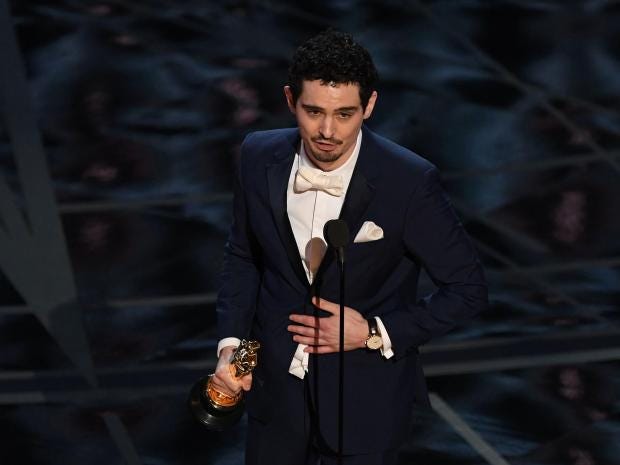 Like the Best Picture award, this award gave me some trouble because of the nominations. I believed they all deserved it for the wonderful, creative movies they led. In the end, Damien Chazelle became the youngest person to win the Best Director award for his work on the love note to Hollywood, La La Land. I haven’t had a chance to watch his previous directorial venture, Whiplash, but I’m already expecting great things from it. Chazelle’s direction of Gosling and Stone and coursing through their love for each other and their dreams helped guide this movie to its success.

Now, this award was hard to determine for me. Out of all the nominations, each one had a case on why they deserved the award. La La Land was my favorite going in and when they were announced, I was happy but also not really impressed. Until the crew reached the podium to reveal that Moonlight, my second pick and the one film that I thought could topple La La Land was announced as the actual winner. A mix-up with the award cards caused the confusion but in the end, the award ended up in the deserving hands of the cast. If you haven’t seen Moonlight, you have an opportunity as the film will be more widely released after their Best Picture win.

Moonlight also took home the awards for Best Adapted Screenplay. La La Land won other awards in Best Original Score, Best Production Design, Best Cinematography, and Best Original Song with “City of Stars”. And the DCEU actually won an award in Best Makeup and Hairstyling for Suicide Squad. Seriously, Suicide Squad won an Academy Award! What a time to be a movie and superhero fan!

That’s my recap of the Oscars. I wish I could get through all the awards but who knows how long that would take! If you want to leave any comments, please do! I would love to read them!

Until next time, guys!