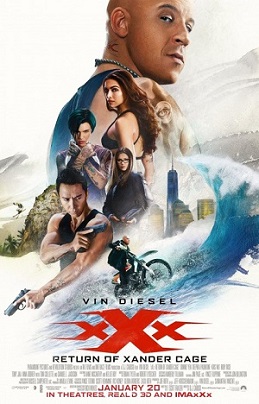 xXx: Return of Xander Cage finds ex-xXx operative Xander Cage (Diesel), who faked his death, living in self-imposed exile in the Dominican Republic. After a team of four skilled individuals led by Xiang (Donnie Yen) infiltrate the CIA in order to retrieve “Pandora’s Box”, a device that is capable of controlling satellites to crash at specific locations. When one of these satellites causes the apparent death of agent Augustus Gibbons (Samuel L. Jackson), Cage is recruited once again by the CIA to return to active service to retrieve the device. While Cage could take this team on his own, he chooses to assemble his own team of maniacs to combat this team. Cage recruits sharpshooter Adele Wolff (Orange is the New Black’s Ruby Rose), DJ Harvard “Nicks” Zhou (Kris Wu), and getaway driver maniac Tennyson (Rory McCann).

While we have seen different sides of Vin Diesel over the years, he seems most at home flexing his muscles in action flicks like this. There isn’t much more to be taken out beyond the momentary skills  CGI-assisted stunts. I mean, Cage’s motorcycle sprouts fins and becomes a jet ski capable of skimming across a tidal wave during a chase sequence. Let’s get real: we’re not here for a deep story. Watching Vin Diesel facing off with Donnie Yen is entertaining enough to keep fans interested during the middle of the movie.

Xander Cage is loud and a little over the top, playing to the strength of Diesel’s character and, in turn, targeting the strengths of its audience. Most people who want to see this film were either fans of the first two, fans of Vin Diesel, or just wanted an action-film where audiences can check their brains at the door before sitting down. Director D.J. Caruso tailored his vision of the film around the likability of the leading man, encouraging Diesel to have fun with it (which he did). As a result, Xander Cage crackles with surprising enjoyable energy and playfulness that is often missing from the brooding, high-octane action fare that fans have got used to in recent years.

In the end, you can’t expect more or less from a film that introduces the central character base-jumping from a radio tower only to land atop a pair of skis, gliding through the thick of the jungle just because he can. As preposterous as that sounds, it’s a hell of a ride nonetheless.