One of the highest anticipated movies of 2016 and one of the hardest tickets I’ve ever had to acquire. My first attempt was met by a red ‘SOLD OUT’ sign. Today, I took advantage of my day off and got my tickets early before I was denied again and this movie was worth all of the wait. Just to make it known, I did see this film twice! 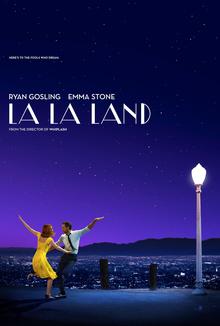 Director Damien Chazelle (Whiplash) brought a colorful romantic musical to life that told the tale of two dreamers in Los Angeles. Aspiring actress Mia (Emma Stone) works as an on-studio barista, going to auditions for her big break. Jazz pianist Sebastian (Ryan Gosling) is playing a piano at any gig he can get while he struggles to pay his bills as he looks to save up and open his own jazz club. They don’t initially get along, but eventually fall in love. However, when Sebastian finds an alternative route that brings him success, can their love withstand the challenges of following their dreams?

Normally, I don’t see musicals. I know their history in movies, but they have become a rarity and not done well. This movie is the exception. The screenplay and direction captures the beauty and elegance of each choreographed dance scene. This movie had me hooked after its first opening scene and song with “Another Day of Sun.” The soundtrack, which I’ve listened to on and off the last few weeks, brings energy to the film and encompasses the journey of our two protagonists. Speaking of our protagonists, Gosling’s and Stone’s acting was superb and their chemistry is believable enough that you can’t help but love their characters and root for them, both individually and as a couple. Stone’s performance has earned critical acclaim and it is earned because of her emotion, energy, and passion that she brought to Mia, most likely pulling from her early experience as an actress. Just listen to “Audition (The Fools Who Dream).

If I had seen this movie before the end of 2016, it definitely would have made the top of my list of best films. This film breathes new life into an almost forgotten genre with powerful performances, confident direction, and excellent musical numbers. La La Land definitely earned it’s place as one of the best films of 2016 and I would recommend it to anyone, especially you, my readers. If it’s playing in your theaters, take the time to see this movie.