At the halfway point of the summer, I think it’s safe to say that it has been a bit of a letdown after the start of the movie season in May. The box office has been buzzing wonderfully so far, but there are very few movies that people are actually talking about at work, around water coolers, etc. After the release of the superhero blockbusters like Captain America: Civil War and X-Men: Apocalypse to sequels like Finding Dory, there were very few original films that you could talk about later after the summer is over. When I heard about Blake Lively’s shark movie The Shallows, I didn’t think anything of it. I didn’t expect Jaws – or even the occasionally “good” open water film that involves the ocean’s greatest predator. But after watching the trailers, you already have the sense that it could be a guilty pleasure film that you take a chance on. Which it exactly turns out to be. Lively’s not here to break new ground. And it’s disappointingly light on great white-caused slaughter. But if you are looking for a 90-minute, check-your-brain-at-the-ticket-window distraction from the world, this is your surprise hit. 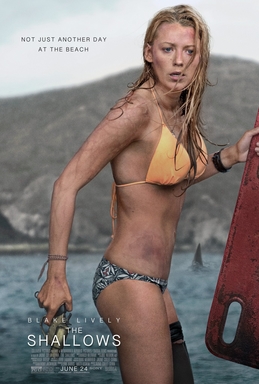 The Shallows stars Lively (The Age of Adaline, The Town) as Nancy Adams – a resourceful med school who travels to a secluded beach in Mexico that her late mother spoke about with beautiful admiration. After her traveling companion flakes on her due to a hangover, the solo Nancy decides to go alone. The beach is just as she was told by her mother and shown in pictures. After meeting up with some local surfers, she surfs until they leave her in the water. After a 20-foot predator takes a chunk of her and her surfboard, Adams makes it to a tiny rock that gets smaller and more precarious as the tide comes in. From there, we see Adams using her resources and an unintentional assist from the surfers in the form of a Go Pro camera to survive.
Directed by Jaume Collet-Serra, this movie had the same pulpy absurdness that was seen in Liam Nesson’s Unknown and Non-Stop. The Shallows tries to be the actress’ 127 Hours but it just comes off as an easy-on-the-eyes, bikini-clad woman in peril. The movie doesn’t try to overthink or make itself out more than what it actually is. You’re not rooting for the shark but you are not rooting against it either. It is a game of cat and mouse between human and animal; Nancy using her wits and MacGyvers her way through this movie while the shark circles for his next opportunity to capture his prey. While the film knows its audience and the attention span of the people they were trying to attract, Collet-Serra and writer Anthony Jaswinski could have added in some more comedic lines for Lively and maybe amped up the action with the shark. There is a small nod to Cast Away with a cranky bird Nancy names Steven Seagull keeping her company. Overall, it was a surprise hit for me and for Rotten Tomatoes, who has certified the movie ‘Fresh’. I would recommend this shark film for anyone looking for a quick but enjoyable film.