Hey, everyone! I know I’ve been gone for a while but things have been crazy in my life! New job, new member of my family, and just trying to get my life more in order. But I’m sure you all might not want to hear about that! While I’ve been busy, the movies I’ve seen has been piling up so I think it’s time for me to return with some new reviews!

I figured a comedy is the best way to start, starring two of the hardest workers in Hollywood right now. 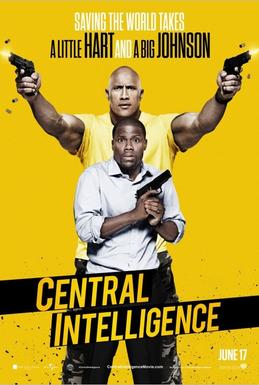 The story of Central Intelligence starts in a high school in 1996, Calvin Joyner (Kevin Hart) is the popular kid in school: the all-american high school athlete and dating the popular girl. Meanwhile, Robbie Weirdicht (Dwayne Johnson) is the overweight kid with no friends. After a nude Robbie is embarrassed by a couple of bullies during the last high school pep rally, Calvin saved him by giving him his Letterman jacket. Twenty years later, Calvin is an accountant and married to his high school sweetheart and he never heard from Robbie Weirdicht until a friend request from Bob Stone, who turns out to be an bigger, built Robbie, reunites high school hero with high school loser.

While at school, Calvin was on top of the world and Robbie was at the bottom of the social totem pole. Years later, Calvin is unsatisfied with where his life has gone; he was passed over for a promotion that was given to his former assistant while his wife, Maggie (Danielle Nicolet), is a partner at her law firm and very happy. With their 20 year high school reunion approaching, Calvin is not planning on attending but Bob forces Calvin to change his mind once Bob reveals he not only works for the CIA, but hunted by the agency as well.

Now, the plot is not that strong at all. I’ll put that out there right now. It’s very thin, where the threads do not cohere. It switches from a slow build to full on action on a moment’s notice while still making time for Hart to be hilariously clumsy and Dwayne sticking to his usual fist-to-face action while still trying to stay in character as the 90’s loving CIA agent. The chemistry between Johnson and Hart definitely carried the film and chemistry is something that needs to be apparent in a buddy comedy like this Hart and Johnson played off of each other, hilariously helping their characters develop during the 107 minutes of movie time and helping them overcome their personal fears. Again, if you have seen one buddy comedy, you have probably seen them all. Dwayne “The Rock” Johnson has mostly stuck with action over the past few years and brought some dry humor along with him. This film really showed that he can be as entertaining in an action-comedy movie. Whether or not his comedy chops will be expanded upon in an R-rated comedy with the upcoming Baywatch movie remains to be seen.

Overall, this film directed by Rawson Marshall Thurber (We’re the Millers) was a breezy, undemanding summer comedy flick that is coming in at the right time and you can watch over and over again…on cable television on repeat. It’s not a terrible, God-awful movie but it’s in the middle ground as far as being a decent film.

I have other movies to review so everyone stay tuned!