Triple-threat writer, producer, and director Nancy Meyers (The Parent Trap, Something’s Gotta Give, It’s Complicated) always seems to turn her movies into a grown-up, first world problem-laden production. Each problem has a happy resolution, despite how difficult it is. Unfortunately, the real world doesn’t always work like that but in the world of films, there is a happy ending in a Meyers comedy. With each of her movies, you have a certain expectation for them. The Intern does not disappoint. 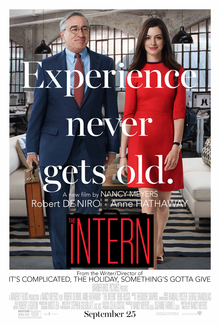 The Intern stars Robert De Niro (Casino, Raging Bull, Silver Linings Playbook) as Ben Whittaker, a lovable 70-year-old retiree who has loose ends and looking to matter again after the death of his wife. His days are filled with morning Starbucks runs and frozen lasagna dinners for one; even tai chi and yoga lessons in the park don’t fill in the lonely hours he used to spend working years ago. Coming across an ad for “senior interns” at an e-commerce start-up in Brooklyn, he jumps at the chance and applies. Getting accepted, Whittaker is assigned as personal envoy/errand runner/generational sounding board to Anne Hathaway’s (Interstellar, Les Miserables) Jules Ostin, the stylish, hardworking, thirtyish entrepreneur who runs the whole company. Ostin is whimsical (riding around the office in a white bicycle and sometimes takes customer-service calls) but also overworked and overwhelmed to find a work-life balance. Once she gets used to Ben’s presence, Ostin finds out that his experience is just what she needs.

The Intern balances between humor and pathos without really determining which the film is going for in its two hours. Every crisis has a plush and soft-cornered answer (unlike the real world’s hard, direct response) and gets resolved quickly, mostly with Ben’s assistance. De Niro’s Whittaker is always helpful and different from the gruff and tough roles of the past, which was refreshing but he was also very muted so a tad weird. What really pulls this film together and drives it is the unorthodox chemistry between the leads. Hathaway and De Niro seem comfortable around each other and supports the comedy of the film as Whittaker leads Ostin onto a better balanced life.
Overall, The Intern is a charming film that Meyers can add to her resume of solid romantic comedy films, powered by the friendship of the two main characters. This film isn’t just a chick flick but a film that everyone young and old can enjoy.