Hello, everyone! I know that it’s been a while and I’m behind on my promise for an update but my move back home is complete for the most part. So, here I am, bringing another review of another movie that has graced the silver screen in the early part of the summer season.

Fast and Furious 6, the sixth installment in the Fast and Furious franchise, has shown that this series of movies continues to update its model just when we think the vehicle has run out of gas. When it comes to most franchises, very few reach this longevity because sooner or later, the same formula starts to grow stale with audiences. No matter how you try to change it, audiences know when the same formula is being used over and over during a movie franchise. The Fast and Furious franchise made sure that this did not happen. 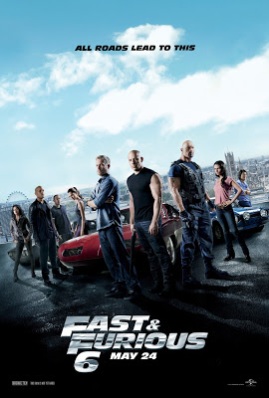 After the events of Fast Five, Dominic Toretto (Vin Diesel), Brian O’Connor (Paul Walker), and the rest of the crew have scattered to different countries and enjoy their freedom from the law. But everything is not as perfect as it seems for the retired fugitives. After a persuading visit from Agent Luke Hobbs (Dwayne “The Rock” Johnson), Dom recruits his team and they all gather in London to take down a team of renegade drivers led by Owen Shaw (Luke Evans) and his second-in-command, the presumed-dead girlfriend, Letty (Michelle Rodriguez). 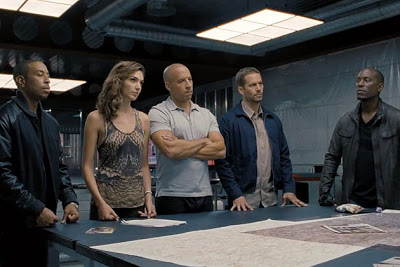 Using the similar formula that made Fast Five as success, instead of a heist film, Fast and Furious 6 is an adrenaline rush for fans of the series and good but relaxing summer action movies. When the first Fast and Furious film came out in 2001, no one could imagine that audiences would still be invested in this series more than ten years later. It really says a lot about the series because the writers and the input of Vin Diesel as a producer. When audiences start a movie, they seek to enjoy the story but also become invested in the characters. When the sequels are spawned from the first film and seeing if it can re-create the magic of the first, as an audience, we seek growth within the characters. We want to see how events change them and affect their lives, for better or for worse.
Vin Diesel’s character, Dominic, is undoubtedly the heart of this series as far as his outlook on life and devotion to his family. He’s willing to do anything to protect them and to make his family whole. The rest of the characters have their roles of one-liners, tech support, and tension to help make the film complete. But it wouldn’t be complete without its share of outrageous, physics-defying, action scenes. This is especially true during the cargo-plane ending. Speaking of endings, stay seated for a post-credits scene that will surprise everyone.
While this is a good movie for fans of the series, definitely check your brain at the door and strap in for a wild ride.

Well, that’s it for now but be on the lookout for my review of the new Superman reboot, Man of Steel, which I’ll have uploaded by the start of next week.

Until then, have a great weekend, everyone!